Don't Bleed Through Your Pants is a series of mini games based on menstruation. It's your job to attempt to get good care,  and not bleed for your pants!

NOTE: The Pop-up information for Healthcare resources does not open if you block pop-ups in the HTML5 version

Version 2 was shown in 2017 at It's a Bloody Nightmare for Inclusive Arts London.

- added links to HMB websites, artist description, Ninja and Doctor games, and a few improvements, and switch to Game Maker 2.

Version 3: The windows version is available as a zip . It loves to give you warning about installing it.

Version 2: is zip or as an NSIS installer. Both love to give you lots of warnings about installing them.

Version 1: Is too basic. So I haven't included it.

Short answer: Why not?

Long Answer: I actually laughed out loud at the "whyyyy?" I did a short talk about it here when I started making this game at a Dames Making Games in 2017. I'm still working and polishing this project.

I was a patient expert for the Heavy Menstrual Bleeding(HMB) standard of care for Health Quality Ontario (HQO)in Canada. (I made this project on my own, and they have nothing to do with it) The reason why HQO made a standard on HMB is because Canada has one of the highest rates of  unnecessary hysterectomy (removal of the uterus) in the world.  HMB is a poorly treated illness, and most illness around periods are often dismissed.  Even basic things like anemia which is a risk of periods, are barely studied. A lot patients spend a lot of time being ignored because "it's just your period" and apparently because it's a natural thing it means that doctors and other people think it's a non-issue.  People generally think that all periods are the same, when in fact, they are all wildly different.  The risks of HMB are  anemia which can result in things like exhaustion, and even worse things like mini strokes and mini heart attacks. I had both at 29.   Other causes of heavy loss of blood can be things like bleeding disorders or fibroids which are tumours that grow in the uterus.  I had all the above.  I almost died because I was constantly rejected, humiliated, and gaslighted from receiving healthcare. This is unfortunately not uncommon.   I use to loose about a liter of blood over the period of a month, which is literally hemorrhaging and was told I was just over reacting and it was impossible.

A lot of patients are told their periods are normal when they aren't. The goal of this game was to give people an idea of how much planning and worrying goes into having a period.  Periods can be painful, time consuming, surprising,  expensive and hilarious. I wanted to poke fun at and criticize a system that doesn't believe patients about their experience.  Maybe if we talked about periods more, less patients would go through the horrors I went through to get good healthcare. 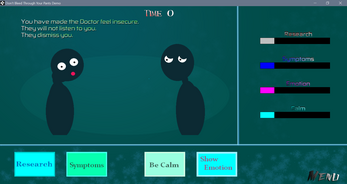 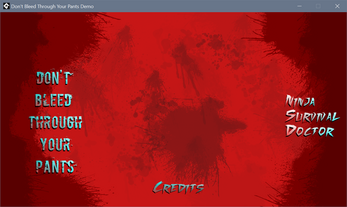 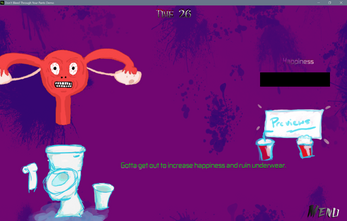 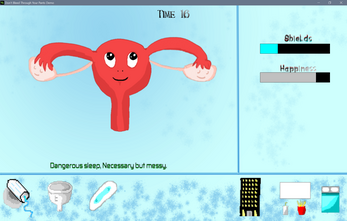